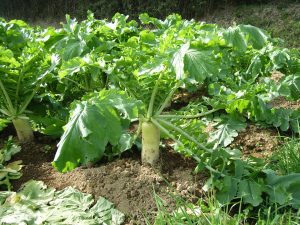 Many Medicines Come from the Plant World

Many pharmaceutical drugs have come from the plant world like digitalis from fox glove, Tamiflu from the Chinese Star Anise plant and many more. Now, a Japanese study published July 23, 2018 in ACS’ Journal of Agricultural and Food Chemistry shows that a giant-sized radish called the Sakurajima Daikon might have compounds that can treat cardiovascular disease and prevent heart attacks and strokes. This radish can reach an enormous size and weight with one reported, as weighing in at 69 pounds! Radishes are good sources of antioxidants and some reports show that they might reduce high blood pressure and prevent blood clots that can lead to strokes. The researchers specifically wanted to examine nitric oxide production in the radish, which is a significant regulator of the function of coronary blood vessels.

Cardiovascular disease that leads to heart attacks and strokes is the number one leading cause of death in the United States and also a leading cause of disability, especially for people who have strokes. According to the Centers for Disease Control and Prevention (CDC):

Half of Americans (47%) have one of these three main risk factors:

The oxidation of LDL cholesterol is a major risk factor for heart attacks and strokes.

If you do not smoke, do not begin and if you do smoke, try to quit, as nicotine and smoke causes damage to blood vessels and also raise blood pressure.

These main three risk factors are followed by:

According to a recent study in Cell Metabolism, some people can reverse diabetes by losing weight, which leads to losing the build-up of fat in the pancreas and liver. This can lead to remission of type 2 diabetes.

Since cardiovascular disease is mainly silent until an attack or stroke, most people do not take being overweight seriously.

Fast foods and snacking on junk foods cause more damage than most people realize.

A sedentary lifestyle is just asking for trouble. Try to walk more, as even a brisk 10 minute walk a day can do a lot to prevent cardiovascular disease.

Americans are big social drinkers and alcohol also raises the risk for diabetes and cardiovascular disease. Few Americans would want to return to the days of prohibition, but too much drinking is just looking for trouble.

Warning Signs and Symptoms of a Heart Attack

Unfortunately these symptoms can also be for many other medical conditions. People do not always act in time in response to these early warning symptoms and for this reason 47% die of sudden heart attacks outside of hospitals.

Rehabilitation after a Heart Attack or Stroke

Since cardiovascular disease is the number one killer, any new discovery that could lead to new medicines should be welcomed such as the recently published discoveries about the giant Japanese radish. However, lifestyle changes must also be made so that we take better care of our bodies.