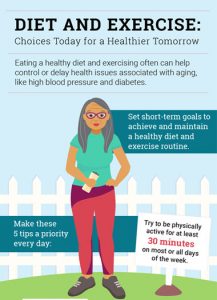 An Australian woman who had a stroke when she was only 52 years old decided to turn her life around and change her lifestyle and eating habits. The fear of death took hold of her, but she turned it around for good and decided to fight back by taking better care of herself.

Only two days after her 25th wedding anniversary Lyn Larkins woke up feeling a little strange. When she got out of bed she kept falling on her knees. However, it never occurred to her that these symptoms could be from something as serious as a stroke. It simply never entered her mind, so she did not immediately call for help. When someone is having a struck every second counts and the sooner they get the treatment they need, the less chance there is for extensive brain damage and also for death. In fact, she did not even confide in family members because she did not want to worry them. Fortunately, when her husband came home from work he took one look at her and saw that her face was drooped on one side and took her straight to the hospital. She could not believe her ears when the doctor in the ER told her that he thought she was suffering from a stroke.

Then they sent her to a different hospital in Wollongong, New South Wales, as there was a special stroke team there. In fact, she asked the doctors if she was going to be ok assuming that it would simply pass. After all, she had not lost consciousness. However, one of the doctors told her they did not know whether she would be OK. They told her she had a bleeding stroke in her brain and that the next 24 hours were crucial as to how the outcome would be. She became absolutely terrified, as until then it had not occurred to her that her life was in any danger. Lyn survived the stroke and was sent home. However, the fear of death and of experiencing another stroke motivated her to take better care of herself. She made up her mind to change her ways. She understood that for years she had not done anything to take proper care of herself. She had high cholesterol and diabetes that was out-of-control. She was also very overweight and had not exercised enough. She had eaten a lot of junk food, sweets, salty snack, fries and chocolate. She did take the pills the doctors prescribed for her condition, but as it turned out if was not enough just to pop pills and continue with her unhealthy eating habits.

She Made Positive Lifestyle Changes and Gave up Smoking

She made up her mind to change her ways – to eat better foods and to get more physical exercise. What worried her now was the fear that all of this was too late, but nevertheless, she persisted. She stopped smoking and she lost weight and participated in stroke rehabilitation for six months to regain speech and movement in her arm.

Never too Late to Change

She stopped eating junk food, diet Coke and for almost a year also gave up chocolate. Now she has a bit of chocolate once a week. She also now eats breakfast, admitting that she never really ate a proper breakfast and she drinks more fresh water. Lyn feels her new ways of eating have given her a lot of energy. She only regrets that she did not make these lifestyle changes years ago. However, she is thankful that at least in her case it was not too late to make these positive lifestyle changes like eating better, exercising more and giving up smoking. She is just so thankful that she was given a second chance.

If you or your loved one are in need of a short or long-term skilled nursing and rehabilitation facility that offers state-of-the-art stroke therapy check out the Royal Suites Healthcare and Rehabilitation in beautiful Galloway Township, New Jersey.

This story should give hope to all stroke survivors that it is never too late to make lifestyle changes so that you will not have another stroke. This woman gave up smoking, lost weight, started exercising and began to eat proper nourishing food.