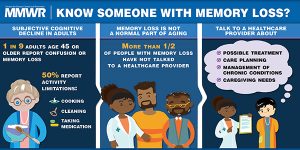 The American Academy of Neurology (AAN) recommends that Seniors age 65 and over be screened every year by their physicians for thinking and memory problems. Aging is a major risk factor for developing problems with memory and thinking. This recommendation was published September 18, 2019, online in the journal of Neurology . The test may take about three minutes. Dr. Norman L. Foster of the University of Utah in Salt Lake City believes that this low-cost way to screen for memory problems can be a boon to improve neurologic care. People cannot be relied on to report their own memory and thinking problems, since they may not recognize that they have any problems. Also, they may in fact not be willing to share these problems with their doctors. Early assessment by their physicians can help identify mild cognitive impairment early. Periodic screening will also show whether these problems are getting worse. Also, the physicians will record this information in their patients’ medical records, which will make it available to other doctors and medical staff. Thus, the patients will get the best medical care possible.

Previous AAN Recommendations were for:

Some seniors have mild cognitive impairment (MCI) where they experience more memory and thinking problems than other people their age, but still they are able to function independently. These seniors with MCI can take care of themselves and continue with their normal routine and day-to-day activities.  MCI may be a symptom for sleep disorders, depression, a medical illness, a side effect to some kinds of medicines or an early sign of dementia. In fact, some cases of MCI will proceed to Alzheimer’s or other kinds of dementia. However, many people with MCI stay that way and do not go on to develop dementia.

According to the National Institute on Aging, about 8 of every 10 people who fit the definition of MCI go on to develop Alzheimer’s disease within 7 years. In contrast, 1 to 3% of people older than 65 who have normal cognition will develop Alzheimer’s in any one year.

Some Kinds of MCI are Reversible

Some kinds of MCI are reversible such as MCI caused by sleep problems, depression or medications. Also, MCI may be associated with hearing loss and sometimes a hearing aid can go a long way to stop the decline into dementia.
According to the AAN, close to 7% of the world’s population in their early 60s have mild cognitive impairment and 38% of people age 85 and older have MCI.

Some of the signs of MCI are:

Diagnostic Testing can help Patients to Plan for their Future Care

If the diagnosis shows that the patient is in early dementia, the patient can plan for the future while they are still able to function and make decisions.

The AAN Claims that doctors should also involve caregivers and family members and provide them with supportive information.

Seniors are encouraged to have several annual diagnostic screening tests such as a yearly dilated eye exam to check for age-related eye diseases, a dental exam, a stool sample for traces of occult blood and for DNA evidence of colorectal cancer, mammograms or MRIs for early detection of breast cancer and PSA tests for detecting prostate cancer. Read more about diagnostic tests for seniors in our blog post from September 11, 2019.

If the time comes to look for a long-term skilled nursing care solution for your loved one with dementia, then you should choose a care facility that has a memory impaired care unit like the Royal Suites Healthcare and Rehabilitation in scenic Galloway Township, New Jersey. Royal Suites offers unique treatments for people with advanced Alzheimer’s dementia like a Snoezelen room. To read more about memory impaired care at Royal Suites see our blog post from May 29, 2018.

If you or your loved one are showing signs of memory or thinking problems, it is time to consult your doctor in order to get a proper diagnosis. However, since many people will not report these kinds of problems to their doctors, it is important that physicians screen patients age 65 and over as recommended by the AAN.