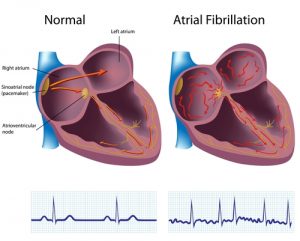 Atrial Fibrillation can Cause Ischemic Strokes in the Brain

Atrial fibrillation is a disorder of the electrical rhythm of the heart. It is the most common cause for an irregular heartbeat, whereby the heart beats too slowly, too fast or in another abnormal way. However, even though atrial fibrillation is a disorder of the heart, its real danger is to the brain, as it raises the risk for ischemic brain strokes. Atrial fibrillation can cause the formation of blood clots and these are the cause of 15-20% of ischemic strokes in the brain. These strokes tend to be more severe than other kinds of strokes. According to the Centers for Disease Control and Prevention (CDC), atrial fibrillation leads to the hospitalization of 750,000 people and the death of 130,000 people every year. It is on the rise in the United States.

Atrial fibrillation is usually treated with anticoagulant drugs like warfarin to prevent the formation of blood clots that could lead to a stroke in the brain. It may also be treated with medicines to control the heartbeat.

The search for these answers led to the research that discovered that 4 out of every 10 people with atrial fibrillation have silent undiagnosed brain damage. The results of the Swiss Atrial Fibrillation Cohort Study (Swiss-AF) were presented August 26, 2018, at the European Society for Cardiology (ESC) 2018 Conference in Munich, Germany.

Obesity has been shown to be a very big risk factor for the development of atrial fibrillation. In fact, a recent Australian study showed that losing only 10% of one’s weight could stop the progression of the disease. The study was published June 14, 2018, in the heart journal Eurospace by the Centre for Heart Rhythm Disorders at the University of Adelaide and the South Australian Health and Medical Research Institute (SAHMRI).

Other Risk Factors for Atrial Fibrillation

Some people who have atrial fibrillation do not show symptoms and often do not know that they have this condition. Sometimes it is discovered by a routine electrocardiogram (EKG) of the heart. Some of the symptoms are:

Atrial fibrillation is on the rise in the United States. If you have been diagnosed with atrial fibrillation you should also have a MRI scan of your brain to make sure there is no undetected brain damage. Also, try to lose weight, as losing only 10% of weight was able to stop the progression of the disease in an Australian study.