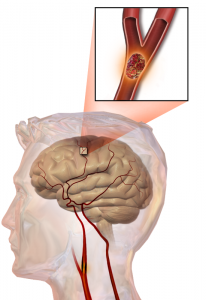 We sometimes hear of terrible road accidents where a car swerves out of control, crosses into next lane and hits another car. We often wonder why the driver suddenly lost control and if it could have been because of a heart attack or stroke? Sometimes we do hear good news though and MSN News reported on January 20, 2019, how a boy Benjamin Bubis, only 12 years old and obviously too young to drive, saved his grandfather’s life when the grandfather had a stroke while driving down a busy highway. Benjamin actually was able to steer the car to the side of the road, phone 911 and get the emergency help to save his grandfather. His grandfather was taken to the UMass Memorial Medical Center in Worcester, Mass where he was given clot busting treatment and the doctor was able to remove the clot.

Time is so crucial when a person has a stroke and every second counts, as about two million brain cells die every minute during an acute stroke. Doctors, therefore, have coined the phrase “time is brain.”

A hemorrhagic stroke is when there is sudden bleeding inside the brain from a ruptured blood vessel or aneurism.

This is an amazing brain-saving procedure which allows doctors to use a special stent to remove a blood clot that is blocking blood flow to the brain. However, it is mainly effective if performed within six hours of having a stroke. Basically, a catheter is inserted into the femoral artery in the groin until it reaches the brain. The doctor then uses imaging to find the clot and then retrieves the clot which allows blood flow back into the brain.

According to the CDC, more than 795,000 Americans get a stroke every year and about 610,000 of these are first or new strokes. About 185,000 strokes (nearly one in four) strike people who have already had a stroke.
Stroke is the 5th leading cause of death in the United States and kills about 140,000 Americans yearly, which is 1 out of every 20 deaths.
Stroke is a leading cause of serious long-term disability and results in a loss of mobility in more than half of stroke survivors age 65 and over.
Stroke costs the United States about $34 billion every year, which is for the cost of health care services, medicines and missed days of work.

Seniors over age 65 have a high risk for stroke that increases with age, although strokes can occur at any age.
Afro Americans have the highest risk for strokes and the highest rate of death from strokes.
High blood pressure
Smoking
Obesity
Diabetes
High cholesterol

Symptoms of a Stroke

Everyone must know how to recognize symptoms of a stroke and call 911 right away even if you are not certain whether or not someone is having a stroke:

NUMBNESS or weakness of face, arm, or leg, especially on one side of the body, Droopy looking face
CONFUSION, trouble speaking or understanding speech, slurred speech
TROUBLE SEEING in one or both eyes, dilated pupil
TROUBLE WALKING, dizziness, loss of balance or coordination
Sudden SEVERE HEADACHE with no known cause

Approximately six million stroke survivors live in the United States. Participation in stroke rehabilitation, which takes place in various settings, usually beginning in the hospital, has been determined to reduce getting another stroke and also improves function and quality of life.

If you or your loved one are in need of post stroke rehabilitation, the Royal Suites Healthcare and Rehabilitation in scenic Galloway Township, New Jersey, offers excellent post stroke care.

Everyone should know how to recognize a person who is having a stroke and phone 911 right away.