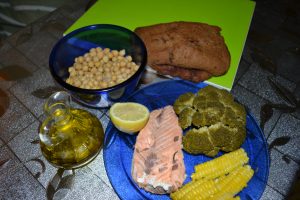 A new study published March, 2019 in NeuroImage tested the Mediterranean Diet to find the association between nutrition, cognition and MRI scans in seniors who did not have dementia. They did this to try to discover exactly which nutrient biomarker pattern (NBP) gives protection against brain disease and cognitive function. To get specific results they used MRI imaging.

The study assessed the blood of 116 healthy seniors between the ages of 65 and 76 for specific nutrients that could help make better brain function. They wanted to be more accurate than the kind of dietary information that they could have received from questionnaires to the seniors. They used MRI imaging to see how well the brain network was performing.

After testing 40 of the participants after two more years, the researchers determined that it was important to eat these kinds of nutrients over a long period of time.

The Mediterranean Diet and Lifestyle

During the 1950s researchers noted that people living in countries bordering around the Mediterranean Sea had lower rates of cardiovascular disease (heart attacks and strokes), lower rates of diabetes and other chronic diseases and dementia than people living in other areas. Since then researchers have been fascinated with the Mediterranean Diet and are trying to unlock the secrets of its health benefits. The Mediterranean Diet is high in fresh fruits and vegetables, legumes, nuts and seeds, fish, whole grains and extra virgin olive oil. It is low in red meat and dairy foods, except for fermented dairy foods like yogurt, sour milk and some kinds of cheese. Wine is drunk in small amounts mainly with meals. Most research has focused on the extra virgin olive oil, as it is the main oil and fat in most Mediterranean countries.

Extra virgin olive oil has been found to be very protective of blood vessels and is considered the most heart-healthy oil. It has anti-inflammatory and anti-pain properties. It has been found very beneficial for protecting the lining of the stomach and intestinal tract against irritating substances. In the lab a substance called oleocanthol has been found to kill human cancer cells. Olive oil also contains compounds found to be beneficial in wound healing.

Choose a Rehab that Puts Emphasis on Healthy Nutrition

The Royal Suites Healthcare and Rehabilitation in scenic Galloway Township, New Jersey offers fine restaurant-style dining and healthy delicious cuisine by a chef under the guidance of a registered dietitian.

It certainly pays to follow this kind of diet as research has shown it promotes good health and longevity.