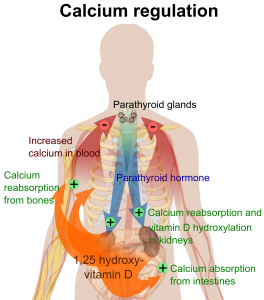 Calcium Regulation and the Role of Vitamin D (orange)

After years of encouraging post-menopausal women and other seniors to take a calcium supplement together with Vitamin D to protect their bones from osteoporosis and to help prevent colorectal cancer, heath care providers and doctors are now taking a second look at this duo of calcium and Vitamin D. A recently published study showed no benefits by taking calcium alone or calcium together with Vitamin D to lower risk for osteoporosis and hip fractures in seniors. Another study showed that rather than preventing the formation of pre-cancerous polyps, calcium alone, or the duo of calcium and Vitamin D actually increased the risk for getting pre-cancerous colon polyps in people who took the supplements for 6-10 years.

Osteoporosis (porous bones) is a disease that silently over the years attacks bones and makes them brittle and fragile so that they break easily. It is a disease that mainly attacks post-menopausal women, but after the age of 70 it also attacks men. Many seniors do not even know they have this disease until they break a bone, which is usually the wrist, spine or hip. According to the Centers for Disease Control and Prevention (CDC), every year more than 300,000 seniors over the age of 65 are hospitalized for hip fractures in the United States. Three quarters of these are women who are more likely to have osteoporosis than men. Hip fractures are a leading cause of disability in seniors and complications from hip fractures can lead to early death.

Colorectal cancer (cancer of the colon and rectum) is the second leading cause of death from cancer in the United States and is the fourth most commonly occurring cancer. It can be prevented, however, if colonoscopy examination reveals pre-cancerous polyps that can be removed before they can develop into cancer.

Results of the study to learn about the effects of taking supplemental calcium only, Vitamin D3 only or the combined duo of calcium and Vitamin D3 to prevent pre-cancerous polyps were published in the Gut journal, March 1, 2018. Participants in this study were divided into four groups:

On group took 1200 mg. a day of elemental calcium.

The third group took both calcium and Vitamin D3.

The fourth group did not take any of the supplements.

Those in the first group that took only calcium alone showed an increase in pre-cancerous colon polyps, but the third group that took the duo of both calcium and Vitamin D3 showed almost four times the number of polyps. It appears that Vitamin D taken alone without the calcium supplement did not show any increase of colon polyps.

This study also showed that the risks for women and smokers who took calcium supplements were at the greatest for developing pre-cancerous polyps.

The study to see if calcium with Vitamin D could reduce the number of hip fractures was published in the Jama journal, December 26, 2017. This was a very large analysis of 33 randomized studies on 51,145 seniors in residential care facilities. The results showed that neither calcium alone, Vitamin D alone or a combination of the both of them prevented hip fractures compared with placebo or no treatment at all.

This study offers no proof that calcium supplements with or without Vitamin D can help with seniors living in residential care facilities.  It is estimated that 50% of seniors living in assisted living arrangements or long-term care and nursing facilities suffer from some form of dementia or Alzheimer’s. Statistically, demented people suffer more from falls than the rest of the population.

The authors of this study conclude that these results indicate that there is no reason to use supplements of calcium or Vitamin D in community-dwelling seniors to prevent hip fractures.

There is undisputed evidence that Vitamin D is necessary for bone health. However, Vitamin D should only be used as a supplement in people whose blood tests show they are deficient. Apparently, doctors and health care providers urged seniors to take supplementation based on their age alone, and not based on test results to see if they were in fact deficient. Vitamin D is stored in fat in the body and is released when needed to help absorb calcium from the intestines so it can be carried to the bones.  However, if there is too much Vitamin D and no more room for it to be stored in fat and if there is also too much calcium, then the calcium gets deposited in places in the body where it is not needed and will do toxic harm.

The number one question now is what can be done to prevent osteoporosis and colon cancer? It appears that for now the best prevention is in making lifestyle changes like getting more exercise and eating good and nutritious foods and getting calcium and phosphorus from foods rather than supplements. Also, studies show that smoking is a risk factor.

People who live in Mediterranean countries have lower rates of colorectal and other kinds of cancers than do people living in Scandinavia, the United Kingdom  or the United States. This is believed to be from the benefits of oleocanthol in extra virgin olive oil.

Research shows that the Mediterranean Diet with its abundance of fresh fruits and vegetables, less red meat, more fish and of course the extra virgin olive oil may lower the risk for hip fractures.

Since taking supplemental calcium either alone or with Vitamin D for 6-10 years increased risk for pre-cancerous polyps, especially in women and smokers and also did not prevent hip fractures,  lifestyle changes may be the best preventive treatment like giving up smoking, getting more exercise and following good healthy eating habits like the Mediterranean Diet.