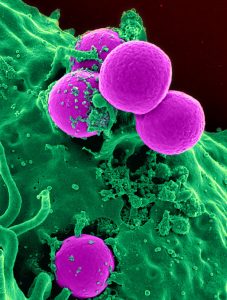 A breakthrough in the fight against Methicillin-resistant Staphylococcus aureus (MRSA) bacteria that kills tens of thousands of people every year may have been found by scientists at the National Institute of Allergy and Infectious Diseases (NIAID) of the National Institute of Health (NIH) in collaboration with researchers from Mahidol University and Rajamangala University of Technology in Thailand. These scientists found that a common Bacillus probiotic can eliminate Staphylococcus aureus bacteria, including the dangerous Methicillin-resistant Staphylococcus aureus (MRSA). Bacillus subtilis is known as the hay or grass probiotic and is commonly found on vegetables and added to probiotic supplements. Results of this research were published October 10, 2018, in the Nature International journal of science.

Some very dangerous bacteria that can cause serious infections in people can no longer be treated successfully by antibiotics, as the bacteria have become resistant to the antibiotics. One of the most dangerous antibiotic resistant strains of bacteria is the Methicillin-resistant Staphylococcus aureus (MRSA). Developing an aggressive MRSA infection that cannot be stopped by antibiotics can lead to very dangerous diseases like pneumonia, sepsis and even death. To learn more about sepsis, commonly called blood poisoning, please see our blog post from September 4, 2018. Some people actually can have these kinds of resistant bacteria living in their noses or guts causing no harm. However, if the skin barrier is broken or the immune system is weakened, these bacteria can form quickly into dangerous colonies. According to the Centers for Disease Control and Prevention (CDC), about one in three people carry Staphylococcus aureus bacteria in their noses and two out of 100 people carry the resistant MRSA strain.

The researchers utilized chromatography and mass spectrometry in order to discover how Bacillus eliminates the growth of Staphylococcus bacteria. They discovered that a certain class of lipopeptides called fengycins was the substance in Bacillus subtilis that eliminated all forms of Staphylococcus aureus, including the dangerous MRSA strain that is resistant to antibiotics.

The scientists are planning more research to verify if a probiotic product that contains only Bacillus subtilus can eliminate  Staphylococcus aureus in humans. If so, this will be quite a breakthrough, as it will be possible to stop the spread of MRSA in hospitals, nursing homes and other crowded places where people pick up this dangerous antibiotic resistant form of Staphylococcus aureus.

If you or your loved one are in need of short or long-term rehabilitation and skilled nursing for wound care after surgery or if you had sepsis, make sure to choose a facility like the Royal Suites Healthcare and Rehabilitation in Galloway Township, New Jersey that is experienced in complex kinds of wound care and also has enough staff on hand to see that you or your loved one get turned often enough not to develop bed and pressure sores. These can get infected and also lead to sepsis. To learn more about wound care please see our blog post from July 4, 2018.

This research gives hope that this dangerous antibiotic resistant strain of Staphylococcus aureus (MRSA) may be able to be prevented in hospitals and nursing homes by giving the patients and residents a simple probiotic supplement Bacillus subtilus.