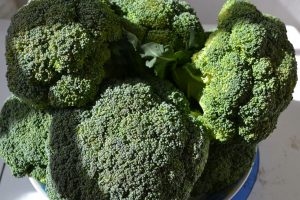 Research has shown that compounds found in the super food broccoli and other cruciferous vegetables are associated with lower risks for developing cancer, preventing cartilage destruction in osteoarthritis and treating schizophrenia. While research showed an association with broccoli and a lower risk for cancer, no one had known for certain how broccoli protects against cancer.

According to a post published May 16, 2019 in the Harvard Gazette, cruciferous vegetables like cabbage, kale, cauliflower, arugula and especially broccoli and Brussels sprouts contain a compound called Indole 3 Carbinol (I3C) that may help to inhibit the growth of cancerous tumors. The compound does not itself suppress the growth of cancerous tumors, but protects a cancer-protecting gene called PTEN from destruction by an enzyme called WWP1. This in turn, allows PTEN to suppress the growth of cancers. Thus PTEN can do its job of suppressing cancerous growths and tumors. Past research with animal studies had suggested that I3C had properties that could fight cancer, but the results in human studies were mixed.

PTEN one of the Most Important Tumor Suppressors

The researchers, led by Dr. Pier Paolo Pandolfi at Beth Israel deaconess Medical Center’s Cancer Center and Cancer Research Institute, were able to restore PTEN’s tumor suppressing function in mice that had been engineered to develop prostate cancer. The results of their research were published May 17, 2019, in the Science journal. Dr. Pandolfi said that PTEN is one of the most important tumor suppressors in the history of cancer genetics and this research may help to find a way to help people who have a genetic deficiency in PTEN. He referred to the compound in broccoli as a potential “Achilles heel.” People who are genetically deficient in this PTEN gene are at a high risk for developing not only cancer, but are also are at risk for developmental defects that can lead to psychiatric illnesses, as well as disabilities in intelligence.

Amounts of Cruciferous Vegetables Needed to Have therapeutic Effects

At this point, it would be necessary to eat more than six pounds (2.7 kg.) of cruciferous vegetables like broccoli a day in order to achieve therapeutic effects in people who already have cancer. For this reason the researchers hope to find a way of making the compound into a pill and are searching for other solutions that can lead to the development of even more powerful inhibitors of the WWP1 enzyme.

Dr. Pandolfi’s previous research led to a drug derived from Vitamin A which led to remission in acute promyelocytic leukemia.

Other studies showed that a different compound sulforaphane found in broccoli may also help to prevent cancer by causing the destruction of cancer cells (apoptosis), especially breast, colon, and prostate cancer.

Destruction of Cartilage in Osteoarthritis.

A study published August 28, 2013 in Arthritis & Rheumatism by researchers from the University of East Anglia discovered that the compound sulforaphane found in broccoli and other cruciferous vegetables was able to prevent or slow down the destruction of cartilage in mice with osteoarthritis.

Broccoli May also be able to Prevent Schizophrenia

A new study published 2017 in Molecular Neuropsychiatry by researchers at the John Hopkins Schizophrenia Center in Baltimore, MD, used sulforaphane extracted from broccoli sprouts to repair the imbalance in the brain caused by schizophrenia.

Royal Suites Healthcare and Rehabilitation is a beautiful 5-star rehab and skilled nursing care facility in scenic Galloway Township, New Jersey. Royal Suites offers fine restaurant style dining with a delicious and nutritious cuisine at the hands of a skilled chef under the direction of a supervised dietitian.

Broccoli and other cruciferous vegetables like cabbage, cauliflower, kale and Brussels sprouts have been associated with so many health benefits that may protect against diseases like cancer, osteoarthritis and even mental illness that it certainly pays to add these to your diet. However, frozen broccoli does not contain these necessary compounds, as it has been blanched.