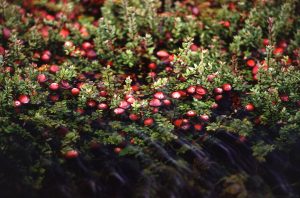 The rise of antibiotic resistant bacteria is a major growing worldwide problem. Strains of bacteria have developed resistance against antibiotics that used to be able to destroy them. The rise of resistant strains is believed to be the result of the overuse of antibiotics in medicine and in agriculture. Scientists fear that soon minor infections may turn deadly if antibiotics can no longer treat them. A new study published May 28, 2019 in the Advanced Science journal by researchers from McGill University and the Institut national de la recherce scientifique (INRS) in Montreal shows that cranberries may help to fight against antibiotic resistant bacteria.

The researchers discovered that proanthocyanidins found in cranberries enable lower doses of antibiotics to destroy bacteria. In fact, the researchers found that in the presence of purified cranberry proanthocyanidin (cPAC) extract, some currently available antibiotics like tetracycline that are no longer able to destroy certain kinds of bacteria that have become resistant regained the ability to fight bacteria. The researchers hope that other antibiotics like tetracycline will also be able to treat infections once again if they will be used together with cPAC. Also, using the purified cranberry proanthocyanidin (cPAC) extract over a period of time together with antibiotics did not lead to resistance.

The American cranberry Vaccinium macrocarpon L., the tart fruit that is especially popular for its sauce at Thanksgiving time has been found to be able to prevent urinary tract infections (UTI). Thus, the researchers chose bacteria that commonly cause urinary tract infections such as Escherichia coli (E-coli), Proteus mirabilis and Pseudomonas aeruginosa. According to Nathalie Tufenkji, professor of chemical engineering and lead author of the study, they were surprised to see that no resistance to antibiotics developed while they used an antibiotic together with cranberry extract.

The researchers did not find that the cranberry extract on its own could be used as an antibiotic, but rather that the cPAC extract could boost the ability of antibiotics to destroy bacteria and at lower dosages.

Some researchers believe that drinking cranberry juice makes urine more acidic and this more acidic environment prevents bacteria from growing and multiplying and this helps to prevent urinary tract infections (UTI). Urine that is alkaline is the best medium for the bacteria to grow in.

The Centers for Disease Control and Prevention (CDC) estimate that every year about two million people in the United States get infected with strains of bacteria that are resistant to antibiotics and about 23,000 people die every year as a result.

Modern medicine is dependent on antibiotics for many medical and surgical procedures like joint replacements, organ transplants, cancer therapy, and treatment of chronic diseases like diabetes, asthma, and rheumatoid arthritis.

Overuse of Antibiotics Leads to Resistance

Antibiotic resistant germs can also be picked up in long-term care facilities, so be certain to choose one that is very clean and has a bathroom in each room like the Royal Suites Healthcare and Rehabilitation in Galloway Township, New Jersey.

The results of the Canadian research show that cranberry extract can be used to boost the ability for antibiotics to fight bacteria. Scientists are also searching for new strains of antibiotics that can destroy resistant strains of bacteria. See our blog post from January 2, 2019 about new possible antibiotic strains that have been found in Irish soil. See also our blog post from May 29, 2019 about Civil War plants that have been found to be able to treat resistant strains of bacteria.