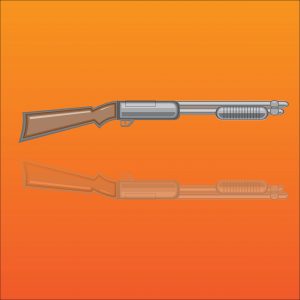 America is a Gun Toting Country

While 89% of the American public believe in constraints against mentally ill people owning guns, less attention has been paid to guns and cognitively impaired seniors.

There are no federal laws prohibiting the sale of guns to PWDs or prohibiting PWDs to have guns. As far as the states go, Hawaii prohibits someone being treated for organic brain syndromes to own a gun. Texas only prohibits a person with dementia from carrying a gun in public, but allows PWDs to own and possess guns.

A study published in the Annals of Internal Medicine by researchers at the University of Colorado Anschutz Medical Campus addresses these issues. According to their research, the most dangerous scenario for a person suffering from dementia is suicide and guns are the most common way demented seniors do themselves in. In fact, just having dementia may be a risk factor for suicide.

Danger to Family and Caregivers

Having access to firearms not only poses danger for the demented senior, but also puts their families and caregivers in danger. In light of this, the Alzheimer’s Association suggests asking two questions:

Driving also is a subject that poses concerns for family members and caregivers of seniors with dementia. A few weeks ago a woman in her 80s with advanced Alzheimer’s drove off in a car and was missing for a few days. Her frantic caregiver husband was not only worried that she might get into an accident by not remembering how to maneuver the car, but his greatest fear was that she would never find her way home again. She was fortunately found, taken to a hospital for observation because of the extreme cold weather and then was reunited with her caregiver husband. This was not an isolated incident and not all of them end in a happy reunion with family members, but instead are found dead.

Besides the danger of demented seniors with guns or driving alone on the roads, there is also a danger for them using power tools and staying safe in the kitchen.

As dementia from Alzheimer’s usually comes in stages, the questions being asked are at what point should a demented senior be asked to turn over their guns and car keys? The study suggests having a sample family firearms agreement, while the senior has only mild cognitive impairment, to set a retirement date for the gun. However, the researchers  stress that no one has ever tested whether or not this can work.

Decisions by Caregivers to Lock up Firearms

Caregivers who believe that it is time to limit access by the demented senior to guns have the following options according to the researchers.

Physicians have the right and responsibility to advise PWDs and their families about limiting access to guns or that it is time to quit driving, but must weigh the welfare of the patient, their right to privacy against safety concerns for family members and caregivers.

Since the suicide rate for PWDs by gunfire is so high and since firearm use by a PWD poses a risk for their caregivers and family members, there should be some kinds of laws to deal with these issues.