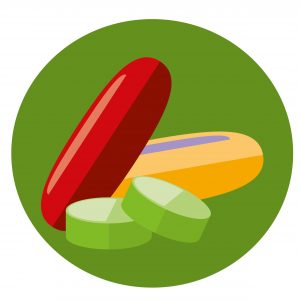 Supplements may be in Pills & Capsules

According to the Centers for Disease Control and Prevention (CDC), half of the adults in the United States use dietary supplements such as herbs and other nutrients. Some of these products are known to be a potential cause of severe liver injury. Unfortunately, the Food and Drug Administration (FDA) does not require the same kinds of safety testing and research as it does to get prescription drugs approved. Herbs and other dietary supplements are considered to be food and thus do not need to be tested. Also, no one does any kind of testing about the ingredients listed on the label. The manufacturers of supplements are not required to prove the safety and effectiveness of a supplement before it is made available to consumers. Unlike prescription drugs, supplements do not have to list possible side effects or interactions with other drugs or herbs.

Supplements May Contain Much Higher Dosages of Herbs than Normally Consumed

Many of these supplements contain much higher dosages of herbs than are normally consumed in tea or some other food form. Also, when you swallow a capsule you have no way of knowing what is really in it. Not all ingredients are on the label. Sometimes you may even have bought a counterfeit product. For instance, according to a study published March, 2015 in Food Chemistry, some commercially produced grape seed extracts were found not to contain grape seeds at all. In fact, six contained peanut skins, which can cause potentially fatal allergic reactions in people who have a peanut allergy and peanuts were not marked on the label!

In September, 2013 a hospital in Hawaii alerted the Hawaii Department of Health (HDOH) that seven patients had been seen with acute hepatitis and liver failure with the cause unknown. However, all the patients reported that they had used a dietary supplement promoted for weight loss and muscle gain called OxyELITE Pro (OEP). The Hawaiian Department of Health sought the help of the Centers for Disease Control and Prevention (CDC) and the Food and Drug Administration (FDA). The CDC sent an advisory alert to professional and provider groups and worked with the World Health Organization (WHO) to alert the international community. The FDA issued a health alert for consumers. The final outcome was that the CDC was able to identify 92 cases including 52 in Hawaii, 24 in the military and 20 in different states. Of these patients:

51 (82%) reported that they had consumed the OEP supplement.

2 (3%) patients had to receive liver transplants.

After this, the Department of Defense discovered 31 more cases at military treatment centers. The FDA found that a new herbal ingredient from the leaves of the Bael tree called aegeline had been added to OEP to promote weight loss. Aegeline was identified as the herbal ingredient that had caused this non-viral hepatitis, that led to cases of liver failure and death. Bael trees are found in India and Southeast Asia. Bael leaves are used in Ayurvedic medicine. The manufacturer recalled OEP supplements that had the added aegeline herb and to date there have not been any further problems. This was the largest reported outbreak of liver disease that was associated with a dietary supplement.

Another harrowing story reported in MSN News October 25, 2018, was about a healthy man who took a green tea supplement for about two to three months and ended up in the hospital with liver failure. He urgently needed and received a liver transplant. While green tea has been drunk for thousands of years, a very concentrated higher amount is put into supplements. Out of the millions of people who take green tea supplements, there have been at least 80 cases of liver damage reported around the world.

The latest FDA alert June 14, 2019 advises consumers not to buy supplements by Life Rising, Holicare or HopeStream, as they may be contaminated with lead.

According to research, most supplements do not do what the sellers claim they will do. In fact, nutritionists and health care professionals recommend that people consume the food rather than taking it as a supplement. Research has shown that food works better than supplements. For instance, fresh or frozen cranberries work better at preventing urinary tract infections than cranberry pills. Fresh oranges and freshly squeezed orange juice work better at preventing colds and viruses than do Vitamin C pills. In spite of this, people are attracted to pills and capsules.

The AARP reported June 11, 2019 that supplements that were supposed to enhance memory function and brain health were just a huge waste of money for seniors who take them. In fact, 25% of adults age 50 and over are taking pills that are costing them $20 to $60 a month according to AARP Senior Vice President for Policy, Sarah Lenz Lock the executive director of the Global Council on Brain Health (GCBH). The GCBH was founded by the AARP and is made up of top neurologists, nutritionists and scientific researchers.

The GCBH noted that eating seafood has been shown by research to be far more beneficial for maintaining memory function and thinking skills in seniors than taking Omega-3 as a dietary supplement.

However, the GCBH notes that when doctors have uncovered a dietary deficiency in vitamins like Vitamin B12 or B9 (folate), then these particular vitamin supplements may be beneficial. As far as deficiency of Vitamin B12 in the United States, about 5-15% of senors age 50 and over are deficient. A simple blood test can show if you are deficient in these B complex vitamins and some people who were found to be deficient in Vitamin B12 developed dementia.

Supplements can be Dangerous for People with Certain Health Conditions

Some herbs and supplements can interact dangerously with prescription drugs or with other herbs. According to the GCBH, people with the following medical conditions must be very careful about taking any kind of supplements and should not take any supplements without consulting with their doctor:

People who are about to have surgery must stop taking herbs like echinacea, garlic, ginkgo, ginseng, kava, saw palmetto, St. John’s wort and valerian that can increase the chance for complications during surgery like too much bleeding and other problems.

People who have cancer must be very careful about what vitamins and supplements they are taking, as some like Vitamins C and E can lower the effectiveness of chemotherapy.

People who have mild cognitive impairment (MCI). Melatonin, a supplement to help with sleep can increase falls in people with MCI.

If your loved one suffers from memory loss and dementia, and is in need of long-term skilled nursing care, the Royal Suites Healthcare and Rehabilitation in Galloway Township, New Jersey has a state-of-the-art memory impaired care unit. They also offer snoezelen therapy for people with dementia. Read more about memory care at Royal Suites in our blog post from May 29, 2018.

Supplements may be useless and a waste of money or even dangerous, except in cases where you have been diagnosed with a vitamin deficiency. In general, it is better to eat healthy foods like salmon and other oily fish rather than popping all kinds of supplements. Consult with your doctor about the advisability and safety of dietary supplements.