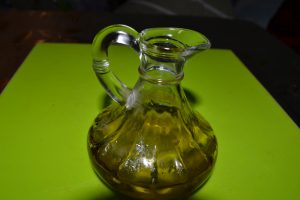 Researchers discovered that a substance in extra virgin olive oil (EVOO)  called oleocanthal has pain relieving and anti-inflammatory properties that work in the same way as the non-steroidal anti-inflammatory drug (NSAID) Ibuprofen. The results were published in the Nature Journal , September 1, 2005, The researchers led by Dr. Gary K. Beauchamp had noticed that extra virgin olive oil produced a slight burning sensation in the back of the throat when swallowed, which made them wonder if it might behave in a similar fashion to Ibuprofen. They discovered that it was oleocanthal (oleo- for olive, -canth- for sting, and -al for aldehydes) that caused this slight burning sensation.

Oleocanthal Does not Have Dangerous Side Effects

However, even though they perform the same way as Ibuprofen by inhibiting cyclooxygenase enzymes (COX-1 and COX-2) in the prostaglandin-biosynthesis pathway, they are entirely different in their structure.Thus, oleocanthal does not have the same dangerous side effects as Ibuprofen. Whereas Ibuprofen is dangerous for the heart, liver, kidneys and other organs, extra virgin olive oil actually protects the heart.

The results of their research suggest that consumption of oleocanthal over a long period of time may help protect against some diseases like cancer, heart disease, Alzheimer’s disease and strokes because it inhibits the same COX enzymes as Ibuprofen. They also suggest that it may be the oleocanthal in extra virgin olive oil that makes the Mediterranean Diet so healthy.

Three Tablespoons a Day of EVOO

A recent study by Brown University headed by Dr. Mary Flynn has determined that the amount of extra virgin olive oil that has to be consumed every day to give health benefits is three tablespoons. She also formulated a plant-based olive oil diet (PBOO) and the 3 tablespoons of extra virgin olive oil should be part of four to five servings of foods with healthy fats like avocados, olives and nuts. The diet should also have six to seven servings of whole grain starches and at least four portions of vegetables. The diet may also include three servings of fruits and two servings of dairy foods and eggs, but this is not mandatory. Also the diet should not include more than 350 grams total of poultry, fish or seafood for a week. Dr. Flynn also said that certain foods must be totally avoided like vegetable seed oils, margarine, mayonnaise and processed meats, as all of these have been linked to an increased risk for cancer.

Dr. Flynn discovered that people who regularly consume EVOO have lower rates of most chronic diseases like heart disease, arthritis, diabetes and cancer. She also discovered that EVOO with a plant-based diet improved biomarkers for cancer and cardiovascular disease in men suffering from prostate cancer. An EVOO plant-based diet also improves the function of insulin, lowers fasting insulin and glucose levels and prevents gaining weight.