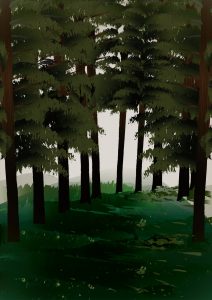 A new study carried out by researchers from the University of Louisville that was published December 5, 2018 in JAHA the journal of the American Heart Association suggests that living in areas with lots of greenery from plants and trees may offer protection against cardiovascular disease (CVD) like heart attacks and strokes.

Previous studies have linked seniors who live near greenery to a reduced risk for depression, reduced risk for stress and anxiety, reduced need for medicines, a reduction in pain thresholds and improved attention spans. Also, there were studies suggesting an association between proximity to greenery and lower numbers of cardiovascular disease events. A  study from China even suggests that living near green areas can protect seniors against frailty. However, no one ever before tried to find exactly what living near greenery does to the body and for this new study the researchers actually did blood and urine tests on participants in the study over a five year period to see just how greenery might protect against cardiovascular disease.

The participants were 508 people who were in an outpatient preventive cardiology clinic at the University of Louisville for people who were at high risk for cardiovascular events. Most of them already had been diagnosed with CVD and 75% suffered from high blood pressure and 60% from elevated cholesterol. However, many of them had incorrect addresses and it was not possible to test them for proximity to green spaces, so in the end only 408 were able to be included in the study. The researchers tested their blood and urine from October 2009 to December 2014 to find signs of blood vessel injuries and risks for heart disease and strokes. They gleaned information about the greenery where they lived from satellite imaging derived normalized difference vegetation index (NDVI) in zones with radii of 250 m and 1 km surrounding the participants’ residences. Most of the participants lived in areas of low greenery in northwestern Jefferson County, Kentucky, but the majority of them lived in single-family residential homes with lots that contained both grasses and trees.

If you want your loved one surrounded by greenery, since it has been associated with so many benefits, especially for the aging population, you will not find a better place than the Royal Suites Healthcare and Rehabilitation in scenic Galloway Township, New Jersey. Royal Suites is surrounded by eight beautiful acres of woods and they also have lovely landscaped gardens. Besides their expert and warm care your loved one may also benefit from the very green location.

These studies show how important it is to have lots of green areas near residential areas, as they are associated with better health, especially good  cardiovascular health.