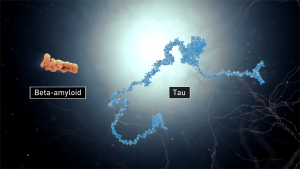 This is fascinating. A preclinical study by researchers from the University of Buffalo published January 22, 2019 in the Brain journal showed that memory was temporarily restored in mice,  who had been modified to have familial Alzheimer’s disease (AD). This is the type of Alzheimer’s which runs in families. The mice regained their memory for an entire week.

Senior author Zhen Yan, a SUNY Distinguished Professor in the Department of Physiology and Biophysics in the Jacobs School of Medicine and Biomedical Sciences at the University of Buffalo said the research team had found a way to temporarily restore memory in the mice.

They found that the loss of glutamate receptors from a process called repressive histone modification causes the extreme memory loss seen in late Alzheimer’s disease. This comes about from both genetic and aging factors, which cause gene expression changes. They discovered this both in the mice and also in post-mortem brain samples of people who had died from AD.

The researchers used enzymes to control this process of repressive histone modification and this restored memory in the mice. The scientists  believe that their research may lead to the development of drugs to treat the severe memory loss of AD.

The mice that had been modified to have familial AD were injected three times with compounds to stop the enzyme that controls repressive histone modification and the researchers were amazed to see a very dramatic improvement in the memory function of the mice.

Future research will focus on trying to develop compounds that could have a longer lasting restored memory effect.

Alzheimer’s disease is the number one leading neurodegenerative disease and affects more than five million Americans. It is a progressive, irreversible brain disease that slowly destroys memory and the ability to think and reason. It causes dementia with severe memory loss, behavior and personality changes, psychiatric disorders, sleep disturbances and a loss in the ability to smell. Eventually, the person afflicted with AD cannot carry out the most simple day-to day tasks and must be totally cared for by others. Alzheimer’s puts an enormous emotional and financial burden on families of people who are stricken with this disease. Most people with Alzheimer’s are cared for by voluntary non paid caregivers who may be family members. The risk for contacting Alzheimer’s increases with age and AD affects far more women than men. Most people with Down syndrome will develop Alzheimer’s disease. It is listed as the 6th leading cause of death in the United States. However, the National Institute on Aging (NIA) claims that many deaths from Alzheimer’s do not get reported on death certificates and so it may really be the third leading cause of death after heart disease and cancer.

Alzheimer’s disease is named for Dr. Alois Alzheimer who first discovered it in 1906 in a woman who had contracted early onset AD. Her name was Auguste Deter and after she died he examined tissue from her brain and found the classical Alzheimer’s beta amyloid plaques and tau tangles.

Enormous amounts of money have been invested in research to try to find a way to prevent, slow down or cure AD. To date, nothing has been found to work in humans even though in many cases treatments worked with mice in the lab. Scientists all over the world are trying to find a vaccine or other way to prevent and treat AD. AD is on the rise, as more and more people reach the age of 60. It is believed that Alzheimer’s has about a 10 year pre-clinical period without any symptoms, although extensive brain damage is taking place. If some kind of way is found to prevent AD it will probably have to be introduced during this early phase.

Research suggests that a combination of genetic, lifestyle and environmental factors lead to the development of AD. The following raise risks for getting AD:

The Royal Suites Healthcare and Rehabilitation in scenic Galloway Township, New Jersey has a state-of-the-art memory impaired care unit specifically for seniors suffering from memory loss and dementia. They offer specialized therapeutic treatments like the Snoezelen Room. To learn more about impaired memory care at Royal Suites see our blog post from May 29, 2018.

We can only hope that this new research will lead to a way to restore memory loss in people with Alzheimer’s disease (AD).