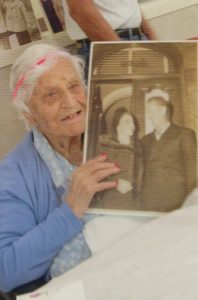 Royal Suites will be celebrating National Skilled Nursing Care Week (NSNCW) coming up May 13-19. This year’s theme is Celebrating Life’s Stories. The week kicks off with Mother’s Day and Royal Suites will be honoring all their wonderful mothers starting with the very oldest one there, Helen Ouellette Butler who is 105 years old! Helen was one of eight siblings and was born in Fall River, Massachusetts.

Helen’s son, Collwyn Butler brought her to Royal Suites when she was 103 years old from Egg Harbor Township where she had lived independently. Helen and her beloved husband, Collwyn, had bought a mobile home in the 70s and after he died at home of a heart attack at age 68 in 1975, Helen continued to live there alone. She was very independent and only lived for a short time with her son Collwyn in Brooklyn because of the electricity black out from Hurricane Sandy. In fact, Collwyn said his mother had driven until she was 99! Collwyn said he brought his mother to Royal Suites after she suffered some fractures, from which he said she recovered very quickly, but never got her old strength back. She also began to have some mild short-term memory problems, which Collwyn believes was from the anaesthesia she needed for her surgery to repair her fracture. He also said she had some hearing loss, but her eyesight was excellent for her age.

Helen’s great life story began when she met her husband Collwyn at the soda shop in the pharmacy of what was then called Atlantic City Hospital, where she worked as a nurse. Collwyn was working for the Atlantic City Electric Company where he worked for 43 years. They married in 1939 and celebrated the birth of their son, Collwyn by giving up smoking and drinking, even though it had only been in moderation. Helen was awarded a citation from the Red Cross when she was 100 years old!

A wonderful Marriage and a Happy Childhood for their Son

Collwyn said his parents had a wonderful marriage and he never heard any kind of bad words between them. Also, Collwyn said they gave him an ideal childhood.

Collwyn said he did a lot of investigating and checked out four other facilities before finally choosing Royal Suites for his mother because he found the staff had a wonderful attitude, which reflected on excellent management and he also liked the fact that there was a dining room on every floor! The recreation director at Royal Suites, Alicia Scaglione describes Helen as someone who is active, plays “bocce” and loves all kinds of music.

A Life of Moderation

When asked what was the secret of her longevity Helen replied that she had always lived a life of moderation.

Happy Mother’s day Helen and all the rest of the wonderful mothers at Royal Suites!