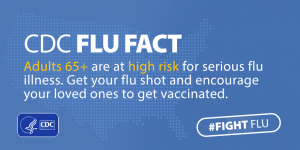 The National Influenza Vaccination Week (NIVW) to raise nationwide awareness of the importance of getting a flu shot begins December 2 and will last until December 8, 2018. The Centers for Disease Control and Prevention (CDC) set up the NIVW to stress the importance of continuing vaccinations for flu throughout the holiday season and afterwards. For some reason most people only get vaccinated until the end of November. However, the CDC wants to stress to people that they can still get vaccinated even though the holiday season has begun. People should understand that it is just as important now to get vaccinated because even though the flu season officially began in October, the greatest numbers of people who fall ill with the flu are yet to come. The more people who get vaccinated the greater is the overall protection for everyone. Also, even people who already have had a bout of the flu should get vaccinated because the vaccination protects against three or four different strains of flu.

Influenza (the flu) is a highly contagious viral respiratory disease that can infect the nose, throat and lungs. In some cases it can cause very serious illness that can lead to hospitalization or even death. The Centers for Disease Control and Prevention (CDC) report that during last year’s 2017-18 flu season there were 49 million cases of the flu, 960,000 hospitalizations due to the flu and its complications and 79,000 flu deaths.

Vaccination for the Flu

The vaccination for the flu for everyone over the age of six months is the best way to prevent getting it, but in some cases it will not prevent you getting the flu, but will usually give you a milder case of it. The flu season begins in October which can see some cases, but the highest rate of people who fall ill with the flu is from December to February. However, some people can catch the flu as late as May. As long as people are falling ill with the flu you should get vaccinated.

People who Cannot be Vaccinated

Allergies and allergic reactions have been the main reason why some people with egg allergies cannot get the flu shot. While most flu vaccines have egg as some part of their ingredients, today there is one flu shot the Flublok Quadrivalent  that has been licensed by the FDA for use in adults 18 years and older that is made without eggs, so it may be suitable for people with egg allergies. However, there is still a possibility of having an allergic reaction to other ingredients in this Flublok vaccine that are derived from insect proteins. If you are prone to severe allergic reactions, you should get vaccinated in an inpatient or outpatient medical setting such as in a hospitals under the supervision of a health care provider who is able to recognize and manage severe allergic conditions.

While most people who get the flu have mild cases and recover within about two weeks, there are people who are at a high risk for complications from the flu that can lead to hospital stays or even death such as:

Residents of Nursing Homes and other Long-term Care Facilities

Residents and the staff of skilled nursing and long-term facilities should all be vaccinated for the flu.

If your loved one is in need of skilled nursing and long-term care, make sure to choose a facility like the Royal Suites Healthcare and Rehabilitation in Galloway Township, New Jersey that requires their staff to be vaccinated against the flu. You can be sure your loved one will be protected by being vaccinated and also by being taken care of by vaccinated staff.  This is very important considering how vulnerable residents in long-term care are to getting complications from the flu.

Since flu can have deadly complications in the elderly, it is important for everyone to get vaccinated against the flu except for people with a history of severe allergic reactions like anaphylactic shock.