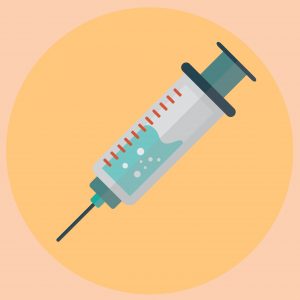 The Center for Disease Control (CDC) reports that a new improved shingles vaccine called Shingrix was approved by the Food and Drug Administration (FDA) in 2017 and is now available. The Shingrix vaccine is 90% effective. The CDC recommends that healthy individuals over the age of 50 get the vaccine, which is administered in two separate injections in the upper arm. The second injection is given within two to six months after the first injection.

Shingles herpes zoster is a painful viral disease that attacks nerves and can affect an entire block of nerves. The pain of shingles is actually neurological pain. Shingles usually begins with the appearance of an unusual looking rash on one side of the body that may become painful followed by intense itching. The rash may develop into painful blisters that crust over and last for about two to four weeks.

Among people who get shingles 1-4% get hospitalized for complications.

Some people are left with complications such as pain, even after the rash disappears, that can last for a long time that is called post herpetic neuralgia (PHN). In some cases this pain becomes chronic and makes for poor quality of life for months or years to come.

If the shingles rash appears near the eyes it can lead to serious complications and vision loss if shingles also attacks the eyes herpes zoster ophthalmicus. It is imperative to get immediate medical help from an ophthalmologist to prevent permanent damage to the eyes

If shingles attacks the facial nerve it can lead to hearing loss and facial paralysis. This complication is called Ramsay Hunt Syndrome.

Sometimes the blisters get infected with bacteria like Staphylococcus aureus and, less commonly, due to group A beta hemolytic streptococcus

Sometimes the virus spreads to other organs in the body like the brain, lungs and liver and can lead to meningoencephalitis, pneumonitis, hepatitis.

However, if shingles is diagnosed in time, within the first 48 hours from when the rash first appears, taking the prescribed medication Zovirax may prevent it from developing into full-blown shingles that can lead to complications like post herpetic neuralgia. However, since the early rash may go unnoticed, it is sometimes too late to take Zovirax in time to prevent the full development of shingles. For this reason the CDC and doctors recommend the new vaccination. It is far better to be vaccinated and go the route of prevention than to have to be afflicted with shingles.

Shingles only affects people who had chicken pox as a child and is caused by the same varicella zoster virus. After a child recovers from chicken pox the virus remains in his/her body in a dormant state. For some unknown reason, possibly a drop in the immune system, it can come alive again in the senior years as an entirely different and far more serious disease than the original chicken pox. It is estimated that 99% of Americans over the age of 40 had chicken pox as a child, as there was no chicken pox vaccine until 1984. Most recovered without any serious complications and many do not even remember that they had chicken pox.

The shingles vaccine is also recommended for people who already had a bout of Shingles to prevent if it from recurring.

For today’s seniors, 99% of whom had chicken pox in childhood, it is recommended for everyone over the age of 50 to get vaccinated as soon as possible. The possibility of getting shingles increases with age and it is estimated that one out of every three seniors will contract shingles. Shingles is a painful illness that can have serious and permanent complications like post herpetic neuralgia and eye and ear damage that can lead to vision and hearing loss, so news about a new and more effective vaccine should be welcomed.