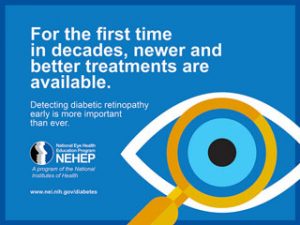 Diabetic eye disease is an umbrella term for several eye diseases that can be found in all types of diabetics (type 1, type 2, gestational) and all of these can lead to vision loss and blindness. These are diabetic retinopathy, diabetic macular edema (DME), cataract and glaucoma. Diabetic Retinopathy is the most common form of eye disease found in diabetics and is the leading cause of vision loss and blindness in Americans of working age. About 40-45% of diabetics already have diabetic retinopathy, but only half of them know it. In most cases the disease is silent without any symptoms in its earliest stages and can only be detected by an eye doctor, which is why everyone with diabetes must have a yearly dilated eye exam.

All of these conditions can lead to vision loss and blindness, but they can be found early before they cause serious damage to the eyes by a yearly dilated eye exam by an eye doctor (ophthalmologist). According to the National Eye Institute, early detection can reduce the risk for blindness by 95%. The doctor puts drops in the eyes to dilate the pupils so that he can see the retina of the eye and the optic nerve. This is a painless test and diabetics and all seniors over age 65 should go once a year for this exam. If you begin to have any kind of vision problems go immediately to an eye doctor and do not wait until the yearly test is due. Your doctor will also test the pressure in your eyes to make sure you do not have glaucoma and will check for cataracts, Glaucoma is not limited to diabetics, but diabetes doubles the risk to contract glaucoma. Also, diabetics are 2-5 times more likely to develop cataracts than people without diabetes and can also develop cataracts earlier than non-diabetics.

The progress of diabetes retinopathy may go through four stages:

Cataracts cause clouding of the lens of the eye and diabetics also get cataracts earlier than other people who do not have diabetes.

Glaucoma is a disease of the eyes caused by pressure building up in the eyes that damages the optic nerve and can lead to vision loss and blindness.

If you or your loved one are due to go to a short or long-term rehab make sure to first have a dilated eye exam, whether or not you have diabetes. In fact, eye problems can make many other problems worse. For instance, people with memory loss who cannot see properly will have even more problems remembering people if their vision is blurred.  Some people with dementia really also cannot see well and this vision problem often gets overlooked. Also, if your loved one is already in a skilled long-term nursing care facility make sure they still get their yearly dilated eye exam.

The Royal Suites Healthcare and Rehabilitation in scenic Galloway Township, New Jersey is a 5-star facility that specializes in diabetes monitoring and care.

Since diabetic eye diseases can be prevented 95% from deteriorating into blindness by early detection from a yearly dilated eye exam, every senior, whether or not they have diabetes should go for this painless yearly examination. The reason that every senior should go is aging increases the risk for cataracts and glaucoma in all seniors, which can also lead to vision loss, although diabetics are at higher risk.