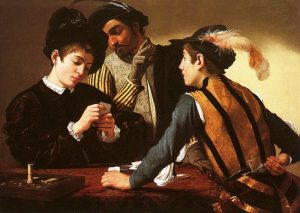 Compulsive Gambling (The Cardsharps by Caravaggio )

Impulse behavior disorders are no small side effect. They can in fact be life threatening, as someone suddenly gets an impulse to do something that is dangerous, especially for their age and status of health and off they go sometimes without even telling a loved one where they are heading off to.

Not only are they unable to resist impulses, but they are also unable to control certain kinds of compulsive behavior patterns like gambling, compulsive shopping, binge eating and sexual behavior. These can lead to serious health, legal, social and financial problems. Impulse disorders also have a tremendous emotionally draining effect on caregivers and family members. While most Parkinson patients cannot put on a lot of speed while they are on foot, nonetheless, many sit on computers and go online and here there are myriads of temptations from online gambling games and shopping.

There are reported cases of seniors with Parkinson’s who try to book flights to Las Vegas and other gambling places when in fact they cannot afford financially to travel or gamble. There are also cases where a senior with Parkinson’s will book a tour to some dangerous place like going to the desert in the heat of day.

Results of a study to examine the relationship between dopamine replacement therapy and impulse disorders was published June 20, 2018, in the Neurology Journal and found that more than half of Parkinson’s patients will at some point develop an impulse disorder. Participants in the study were 411 seniors with Parkinson’s who had been afflicted with it for five years or less. They were followed up every year for a period of five years. During this follow-up period impulse disorders increased from 19.7% to 32.8%. Two dopamine agonists, Mirapex (pramipexole) and Requip (ropinirole), were associated with the greatest risk for getting impulse control disorders: 4.67 times higher for Mirapex, and 4.86 times higher for Requip. Those Parkinson’s participants in the study who were younger and on higher dosages of dopamine replacement drugs were most at risk for developing compulsive and impulsive behavior disorders.

During the time period of the study, 30 patients stopped using dopamine agonists and they subsequently were cured of their impulse disorders.

Other Drugs for Parkinson’s

Other drugs for treating Parkinson’s like Levadopa were not found to have an increased association with impulse disorders.

Parkinson’s is a progressive neurodegenerative disease for which no real cure has been found and most of the drugs prescribed to Parkinson’s patients are mainly aimed at treating symptoms. Parkinson’s leads to serious disabilities as it affects speech, gait, coordination and motor skills. It also leads to tremors and a loss of balance and falls are a dangerous consequence of PD. Parkinson’s is the second neurodegenerative disease after Alzheimer’s. Some new studies indicate that a type of Vitamin B3 and a protein in fish may help to prevent Parkinson’s disease. See our blog post from June 21, 2018.

Eventually, most people afflicted with Parkinson’s will need assisted living arrangements or skilled nursing care in a residential facility like the Royal Suites Healthcare and Rehabilitation in Galloway Township, New Jersey. Royal Suites has a very high ratio of staff members per the number of residents and thus can give a lot of individual attention to someone afflicted with PD.

The results of this study may help doctors to choose which Parkinson’s medicines to prescribe and at what dosages. Hopefully, a cure or way to delay or reverse Parkinson’s disease will soon be found.