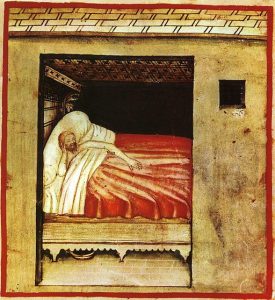 Post-stroke sleep disorders like insomnia and obstructive sleep apnea can interfere with stroke rehabilitation and recovery from a stroke. A study published May 30, 2018 in Scientific Reports discovered that insomnia, which is the inability to fall asleep or to remain asleep, may be a long-term post-stroke condition. This is especially common for people who had a right hemispheric stroke. In fact, the inability to get good quality sleep can disrupt the patient’s post-stroke rehabilitation, so that it is difficult for them to learn new skills.

The Study Took Place in a Sleep Lab

The researchers carried out their investigation of post-stroke sleep disorders in a sleep lab in the Department of Psychiatry and Psychotherapy at the University of Freiburg Medical Center in Germany. Participants in the study were 19 community-living seniors (13 men, 9 women), who had suffered a right hemispheric stroke at least a year earlier. None of them smoked tobacco cigarettes or drank more than two units of alcohol a day. Also, they were not taking any kinds of medicines that could affect sleep.

Participants were Tested for Two Nights in the Sleep Lab

The participants were tested for two nights in the sleep lab, but the results were only analyzed for the second night. The participants also had a sleep diary to record their experiences and wore acti-watches for two weeks before spending the first night in the sleep lab. They also took some psychological tests and underwent physical examinations.

The researchers used a Nocturnal Polysomnogram (PSG) test to compare the sleep habits of the stroke survivors with a control group from the general population who had not suffered from a stroke.

This consisted of five sessions for 20 minutes each, during which time the participants laid in bed in a dim room, while an electroencephalogram (EEG) test evaluated the electrical activity in their brains.

The stroke survivors were found to be suffering from a kind of insomnia-like sleep disorder, as it took longer for them to fall asleep and to remain asleep. Other signs of insomnia were that the stroke survivors spent fewer hours sleeping and during the day they could not easily fall asleep to make up for lost hours of night sleep. This insomnia made it difficult for them to perform some kinds of tasks and interfered with their rehabilitation.

A study published June, 2013 in Neurology Clinical Practice showed that obstructive sleep apnea (OSA) is not only a high risk factor for getting a stroke or a new stroke, but also can interfere with stroke recovery and rehabilitation. Obstructive sleep apnea (OSA) is a condition where people periodically strop breathing during the time they are sleeping. In some cases, people with OSA stop breathing hundreds of times during the night. Not only can this lead to chokingm but it also causes less oxygen to reach the brain. In fact, some research shows an association between OSA and the development of Alzheimer’s disease and dementia. See our blog post from June 8, 2018 about sleep disorders and Alzheimer’s. It is estimated that OSA occurs in about 20% of the population and both aging and obesity raise the risk for OSA. OSA is also linked with chronic diseases like high blood pressure, atrial fibrillation, heart failure and diabetes.

OSA can be Treated

The good news is that OSA can be treated by continuous positive airway pressure (CPAP), which can prevent getting a stroke or a new stroke. Treating OSA also helps a stroke survivor to regain function.

Other Risk Factors for Strokes

The Royal Suites Healthcare and Rehabilitation Center is a beautiful 5-star facility known for its excellent post stroke care. Royal Suites is situated close to hospitals and main roads in scenic Galloway Township, New Jersey. It is surrounded by eight acres of woods and landscaped gardens.