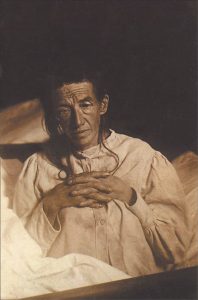 Research is focusing on a way to detect Alzheimer’s disease (AD) long before it shows any symptoms in the hope that some kind of intervention or treatment will be found to prevent or stop its progressive decline into dementia with its severe memory loss, personality changes, psychiatric behavior disorders, sleep disturbances and an inability to carry out any kind of day-to-day tasks. To date, in spite of all the ongoing research, no treatments or interventions have been found to prevent or treat Alzheimer’s disease. Also, tests for detecting Alzheimer’s like MRIs and PET scans are very expensive and can only show Alzheimer’s once it has advanced.

Scientists from the University of Alberta in Canada have developed a saliva test that can predict Alzheimer’s disease in its very earliest stages. The research was published October 2, 2018, in Frontiers in Aging Neuroscience. Using metabolomics research to establish metabolite biomarker panels, this saliva test can also show whether a person is:

These three groups were compared with five sets of both modifiable and non-modifiable risk factors for Alzheimer’s disease such as:

Participants in the Study

The CN and MCI participants were healthy community-dwelling seniors from the Victoria Longitudinal Study (VLS). The AD patients were from the Geriatric and Cognitive Neurology Clinic at the Glenrose Rehabilitation Hospital in Edmonton.

Method for Obtaining the Saliva

The participants were told not to eat one hour before having their saliva tested, but light washing was allowed before the saliva was collected.

The results show that a non-invasive saliva test can be easily carried out in a doctor’s office and can show accurate results and differentiate between cognitively normal (CN) people, people with mild cognitive impairment (MCI) and Alzheimer’s disease (AD).

Alzheimer’s disease is the number one most common neurodegenerative disease in the United States and is estimated to have afflicted more than 5.7 million Americans. It is listed as the sixth leading cause of death, although the National Institute on Aging (NIA) says that many cases do not get reported as the cause of death and so Alzheimer’s may actually be the third leading cause of death after heart disease and cancer. Alzheimer’s disease is named after Dr. Alois Alzheimer who found a patient in an asylum named Auguste Deter who had an unusual form of mental illness with severe memory loss. After she died he examined her brain and discovered many abnormal plaques and tangles that he had never seen before. These plaques made up of beta amyloid protein and tangles made up of tau protein are the classic two hallmarks of Alzheimer’s disease. While Alzheimer’s disease mainly affects seniors over age 60, there is also an early onset form of the disease that can hit people in their 40s and 50s.

Alzheimer’s places an enormous emotional and financial burden on those suffering from it and their families. Most caregivers are voluntary unpaid family members, some of whom are also aging spouses with their own set of health problems.

In some cases there are genetic variations that are mainly from APOE genes and these are usually associated with early onset cases. Certain vascular diseases like high blood pressure, strokes and heart disease as well as chronic metabolic diseases like diabetes are associated with increased risks for developing Alzheimer’s disease.

So far no one has found a cure or way to prevent Alzheimer’s, but research shows an association between certain diets and lifestyles that lead to a lower chance to get Alzheimer’s disease. Countries around the Mediterranean, for instance, have a much lower rate of dementia, strokes and heart disease than countries in other areas, so many researchers have carried out various studies about the Mediterranean Diet which has a lot of fresh fruits, vegetables, legumes and extra virgin olive oil as the main dietary fat. The Mediterranean diet is low in red meat, but has more fish and poultry. It is not high in dairy products except for fermented ones like yogurt and some kinds of cheeses.

Advanced Alzheimer’s with its accompanying dementia is one of the main reasons seniors are sent to skilled rehabilitation and nursing facilities. If your loved one is in need of more protective care be certain to choose one like the Royal Suites Healthcare and Rehabilitation in scenic Galloway Township, New Jersey that has a fantastic impaired memory care unit with unique healing treatments like aroma therapy and the Snoezelen Room. To read more about Memory Care at Royal Suites see our blog post from May 29, 2018.

This saliva test may make it easier for people suffering from dementia to get properly diagnosed long before it progresses to dementia and memory loss.  Hopefully, there will be a breakthrough and some new intervention or treatment will be found to prevent or slow down the decline to dementia.