Ibuprofen is not a Cure for Alzheimer’s 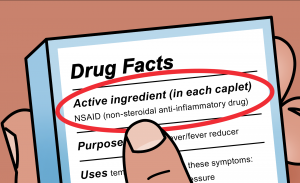 Recent media headlines declaring that Ibuprofen could prevent Alzheimer’s disease appeared very quickly all around the world. Only a few of the articles bothered to explain that Ibuprofen is not a cure for Alzheimer’s, but if it is taken early enough, before the disease sets in, it may stop the neuroinflammation that causes a buildup of “amyloid-β” protein in the brain which eventually, as time passes, will destroy neurons (nerve cells) and this damage to the brain leads to Alzheimer’s.

This is the tragedy here because many seniors over the age of 65 may already have Alzheimer’s, but they do not yet know it and it will not get diagnosed until they begin to show signs of memory loss and cognitive decline. Their only hope is that a real cure will soon be found.

So no one should be running out to buy Ibuprofen for Granny or Grandpa who are already infected with the disease. Not only will it not cure them of Alzheimer’s, but they would be at risk for some of the very dangerous side effects of non-steroidal anti-inflammatory drugs (NSAIDs), such as heart attacks and strokes, heart failure, liver failure, kidney failure, vision loss, hearing loss, bleeding ulcers, bleeding in the brain and more. Bleeding in the brain, for instance, can cause Vascular dementia which is very similar to Alzheimer’s. So hypothetically some people who will try to avoid Alzheimer’s dementia by taking Ibuprofen might instead get bleeding in the brain which might give them Vascular dementia. In fact, autopsies show that some seniors have mixed dementia which consists of both Alzheimer’s and Vascular dementia. The Food and Drug Administration (FDA) has already issued warnings that taking NSAIDs can cause a heart attack or a stroke. What is worrisome is that since Ibuprofen is sold over-the-counter without a doctor’s prescription, people may start taking Ibuprofen that they may not need just because they think it will stop them from getting Alzheimer’s disease. In fact, many researchers and doctors think that Ibuprofen, even at the lower dosages, should only be a prescription drug.

No one should take Ibuprofen without consulting with a physician.

Ibuprofen might prevent the development of Alzheimer’s in people at high risk, if it is taken before the disease sets in, which would have to be before age 55. However, this can do nothing to help the more than 5 million seniors in the US who are already infected with Alzheimer’s disease. The most positive breakthrough, however, is the simple saliva test for Aβ levels which will show who is at the highest risk for Alzheimer’s and then perhaps some other safer drug or lifestyle change may be found to prevent Alzheimer’s. However, the real break through will be when a real cure is found for Alzheimer’s and other dementias.