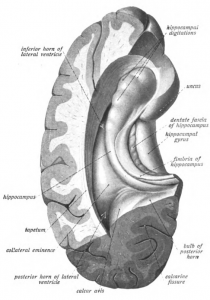 Cross-section of cerebral hemisphere showing structure and location of hippocampus

Cigarette Smoking, Diabetes are Risk Factors for Calcifications in the Brain

Hippocampal Calcifications Found to be Indicator of Vascular Disease

Calcifications have been shown to be related to vascular disease, as calcium deposits build up in the blood vessels and this can possibly lead to strokes and vascular dementia. According to the lead author of the study, Esther J.M. de Brouwer, M.D., a geriatrician at the University Medical Center in Utrecht, the Netherlands, a recent histopathology study showed that hippocampal calcifications were found to be an indicator of vascular disease. She also pointed out that it is a known fact that smoking and diabetes are risk factors for cardiovascular disease and so it is probable that smoking and diabetes are also risk factors for calcifications in the hippocampus.

The researchers examined the association between vascular risk factors like high blood pressure, diabetes and smoking, and calcifications in the hippocampus and they also assessed the effects of calcifications on cognitive function.

Study did not Find Link between Hippocampal Calcification and Memory Function

Participants in the study were 1,991 seniors with the average age of 78 and 380 (19.1%) of them were found to have hippocampal calcifications.  However, the study did not find that the presence of these calcifications affected cognitive function, which puzzled the researchers and they surmised that the calcium deposits were probably not in the part of the hippocampus related to memory function. Also, all the participants had anyways come from a memory clinic, which perhaps clouded the results. However, the researchers plan more research with different groups of people to learn more about calcifications in the hippocampus.

At any rate, it is not normal for calcifications to be in any part of the brain. The researchers concluded that smoking, diabetes and aging contribute to calcifications in the brain, including in the hippocampus, but were not able to make any positive conclusions concerning memory function, since all the participants in the study had come from a memory clinic. In other words, they all had memory problems and not just those with hippocampal calcifications.

Alzheimer’s disease is the most common form of dementia affecting more than five million Americans and is on the rise. While enormous amounts of money have been poured into research, to date no one has found a cure or a way or preventing or slowing down the progress of Alzheimer’s, which leads to more and more memory loss and finally an inability to think, reason or do things. Many of those afflicted with Alzheimer’s deteriorate to the point where they no longer recognize their loved ones, friends and family members.

Alzheimer’s hallmarks are abnormal tangles of tau protein and abnormal plaques of beta amyloid protein that form in the brain. No one knows for certain what causes the brain to malfunction and to start forming toxic amounts of these two proteins. If a cause were to be found, then perhaps a vaccine could be made to prevent it.

Alzheimer’s specifically damages the memory centers of the hippocampus and causes the brain to shrink. However, this study could not prove that calcifications in the hippocampus of the brain led to memory loss, but they may be linked to vascular damage in the brain.

If you have a loved one suffering from Alzheimer’s dementia who needs to be in a long-term skilled nursing care facility, then make sure you find one that has a memory impaired care unit like the Royal Suites Healthcare and Rehabilitation in Galloway, NJ.