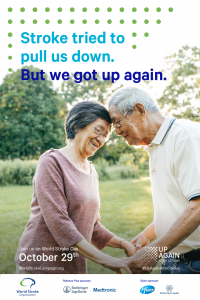 Today, October 29 is World Stroke Day, which is sponsored by the World Stroke Organization (WSO) to raise worldwide awareness that strokes can be treated and prevented. According to the WSO, about 80 million people worldwide have suffered from a stroke and about 50 million stroke survivors are afflicted with some kind of disability or impairment. The message for this year’s World Stroke Day is that with early treatment it is possible to get back up from a stroke and that there is life after a stroke.

There are two major kinds of strokes and they both disrupt the flow of oxygen and nutrients to the brain.

Ischemic stroke is the most commonly found stroke that accounts for about 80% of all strokes. It is caused by a blockage, usually a blood clot or a narrowing in one of the arteries that carries blood to the brain called stenosis. The clot may be from the neck or the brain called a thrombosis or a clot that moves from another part of the body to the brain called an embolism.

This is a stroke caused by bleeding in the brain usually from a ruptured blood vessel.

Other Kinds of Strokes

This is a stroke that lasts only a few minutes and then goes away. However, it should not be ignored because if it is not treated it can return as a major disabling stroke within a few hours or a few days. Anyone with TIA symptoms should phone 911 for help even if the symptoms go away.

A brain stem cell may not be easily diagnosed as it does not cause the typical one-sided paralysis or weakness like the other strokes. Symptoms may include vertigo, dizziness, double vision, slurred speech and severe imbalance. The brain stem controls many functions in the body including breathing, blood pressure and consciousness. Also, all the motor functions of the body pass through the brain stem, so many important processes can be interrupted or disabled. Like all strokes the sooner treatment is begun the greater is the chance for recovery.

In the worst case scenario a brain stem stroke can lead to locked in syndrome, which is a condition whereby there is total paralysis in every part of the body and the only movement possible is blinking of the eyes.

Recognizing Signs of a Stroke

Smoking is a very high risk factor for both strokes and heart disease.

Oxidized LDL cholesterol can lead to a buildup of plaque in the arteries called coronary artery disease (CAD).

It is really crucial if you are a diabetic to get it under control.

Eat healthy foods especially a lot of fresh fruits and vegetables. Research shows that eating fish is good for the brain.

Get up and get moving. Brisk walking is safer than running, but also try not to sit too long in front of the television or computer. It is recommended to get up every 10-20 minutes, stretch and walk around a bit.

The National Institute on Aging (NIA) has a Go4Life website with free demonstrations and videos of physical exercises.

Some hospitals have special treatment facilities just for dealing with strokes.

Various drugs are used to treat strokes. Some may be prescribed to dissolve blood clots in an ischemic stroke. Also, there is a clot retrieval process that can quickly remove a blood clot that may be blocking a major artery, but this treatment is only used for treating ischemic strokes.

Rehabilitation after a Stroke

The sooner rehabilitation is begun, the better is the chance to regain function and motor skills and rehabilitation should begin while the person is still in the hospital.

After being discharged from the hospital it is important to keep up the rehabilitation and this may be best carried out in a rehabilitation unit in a residential rehab facility like the Royal Suites Healthcare and Rehabilitation in scenic Galloway Township, New Jersey. They offer excellent post stroke therapy.

Everyone must know how to recognize stroke symptoms and to call right away for help.