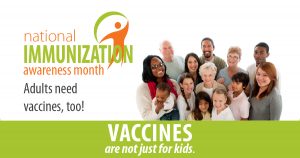 Vaccines can Save Seniors from Deadly Diseases

August is National Immunization Awareness Month and this is the time to remind seniors of some of the vaccines that can help prevent them from deadly diseases. While some are fairly new developments, others are old ones like the tetanus diphtheria (TD) vaccine that needs a booster every 10 years.

Did you forget to get your booster shot?

Diphtheria was thought to be on its way out the way small pox went, due to world-wide vaccinations, but unfortunately diphtheria is rearing its head again in some parts of the world. There are not many cases in the United States, but that is only because of immunization. However, as it started coming back in other countries, diphtheria was added to the booster shot for tetanus, which every adult should get every 10 years. Few people remember what a mass killer diphtheria was before the development of a vaccine to stop it in its tracks. Diphtheria is a very deadly lung disease that has a very poor outcome. Without treatment one in every two people who get it will die and even with treatment one in every 10 people who get it will die.

Diphtheria is caused by the Corynebacterium diphtheriae bacterium. Diphtheria is extremely contagious and is spread from person-to-person by air born droplets, but in some cases it can be contracted from toys, clothes or other objects that had been in use by someone with active diphtheria. Also, the diphtheria germs can hang around for a long time in someone who had it and they can continue to spread it to others.

If the toxin makes its way into the blood stream then it can cause damage to organs and the nervous system such as:

Treatment is by antitoxin and anti-biotics, while the patient is kept in isolation.

Tetanus (Lockjaw) is caused by clostridium tetani, which are anaerobic bacteria that live in the ground in conditions without air. Tetanus is also found in manure and even in dust. Unlike diphtheria, tetanus is not an airborne disease and the usual route of infection is by deep puncture wounds, insect or animal bites and sometimes surgery or dental treatments. However, cases have been reported whereby someone got tetanus just from being pricked by a thorn of a rose. In order to prevent tetanus, someone must be treated with a tetanus shot within 24 hours of the injury. Due to immunization, tetanus is rare in the United States with only about 30 cases reported a year. Almost every case of tetanus occurs because someone never had a tetanus shot or did not keep up with the booster every 10 years.

Tetanus causes formation of a toxin that leads to excruciatingly painful muscle spasms, especially to the face and jaw which is why it is also called lockjaw. These spasms are so severe they can cause the jaw and mouth to lock and the person cannot swallow and has difficulty breathing. Muscle spasms can be so strong that the spasms can break bones. Tetanus may also produce seizures, blood clots and pneumonia. Tetanus can lead to death and about 1-2 out of every 10 people with tetanus die.

There is no known cure for tetanus and it can last for years. Drugs are given to help control the spasms and manage the symptoms.

Prevention of both tetanus and diphtheria is by vaccination. The tetanus diphtheria vaccinations given to infants for diphtheria and tetanus also contain the vaccine for pertussis, commonly called whooping cough. Whooping cough has also been returning in some places where people did not get vaccinated, but so far whooping cough vaccine has not been included in the booster for seniors.

This vaccine protects seniors against pneumococcal diseases, the most dangerous of which is pneumococcal pneumonia, which is a severe form of pneumonia with a high rate of mortality for seniors.

Shingles is a disease that mainly hits people over age 60 and the older one gets, the greater is the chance to get shingles, which is a painful viral disease that can cause significant disruption to quality of life. See our shingles vaccine blog post from March 2, 2018, for more information about shingles and the shingles vaccination.

Moving to Short or Long-Term Rehab and Skilled Nursing Care

Make sure you or your loved one have been immunized against all the dangerous diseases for seniors that can be prevented by vaccination before moving to short or long-term care.

Every senior should take advantage of these life-saving vaccines and get immunized to prevent getting diseases that can lead to a very bad quality of life or even death.