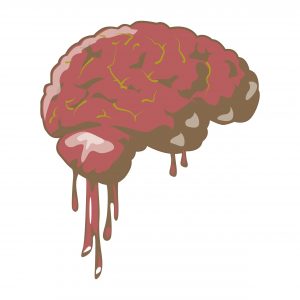 Bleeding in Brain can Cause Vascular Dementia

Vascular dementia also called vascular cognitive impairment (VCI) is the second most commonly found dementia after Alzheimer’s disease (AD). While it may appear similar to Alzheimer’s disease (AD), it is from a completely different cause. Vascular dementia is caused by blockings and damage to arteries that carry blood flow to the brain. This is often the result of a stroke or a few transient ischemic attacks (TIA) mini strokes that lead to bleeding or blood clots. As in a stroke, the longer the blood flow is cut off the greater is the brain damage. VCI can come on very suddenly with no real warning and it has the potential to get better as the brain heals or worse, especially if the person has experienced a second stroke. Post-stroke dementia can occur months after having had a stroke.

A silent stroke is a stroke that has gone unnoticed and thus does not get diagnosed. In fact, it is estimated that 20-30% of people get a silent stroke. Unfortunately, if a silent stroke goes unnoticed, most people will have another major stroke. When a stroke or mini stroke is recognized, medical treatment can prevent a new stroke from occurring.

Symptoms of Vascular Dementia that are Similar to Alzheimer’s disease:

So far no way has been found to reverse brain damage from bleeding in the brain that causes vascular dementia. Your doctor may prescribe medication to help prevent more strokes.

Many prescription drugs can contribute to bleeding. Also over-the-counter drugs like ibuprofen and aspirin which are non-steroidal anti-inflammatory drugs (NSAIDs) can cause serious bleeding. Discuss with your doctor the medicines you take and also let your doctor know about any herbs spices or supplements you may also be taking. Many herbs and spices like ginger, ginkgo, willow bark, licorice root, turmeric, chamomile and more can cause bleeding. Cruciferous vegetables like broccoli and cabbage contain rich amounts of Vitamin K which can help prevent bleeding.

If you or your loved one are post-stroke, the royal Suites Healthcare and Rehabilitation in Galloway Township, New Jersey offers expert post-stroke care. They also have an impaired memory care unit if your loved one is suffering from memory loss.

It certainly pays to try to prevent strokes or further strokes that can lead to more serious forms of vascular dementia.