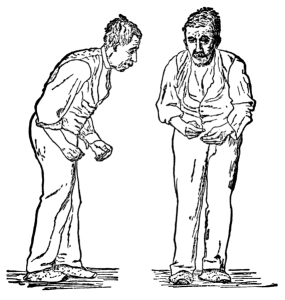 One of the symptoms of Parkinson’s Disease (PD), besides tremor, is an unusual kind of shuffling walk called the Parkinsonian Gait. Another symptom of Parkinson’s may be stiffness and rigidity of muscles. In this case a person afflicted with Parkinson’s disease can suddenly, without any warning, go rigid and fall down. They also cannot usually use their hands fast enough to break their falls and so they can go down with a lot of force. For this reason walking downstairs is especially dangerous. At any rate, people with Parkinson’s disease (PD) suffer from a lot of unintentional falls. Unintentional falls can lead to broken bones, hip fractures and even death. A new study published by researchers from the Universities of Toronto and Colorado, July 23, 2018 in Clinical Rehabilitation offers hope for reducing the number of falls in people with Parkinson’s disease.

The study tested a method for gait training that uses music and rhythm called Rhythmic Auditory Stimulation (RAS) to improve gait. The results of this study show that RAS can reduce the number of falls in Parkinson’s patients.

Method of the Study

There were 60 seniors who participated in the study ages 62-82 years old who had all been diagnosed with idiopathic Parkinson’s disease and had experienced at least two falls over the past year. They were placed into two groups and given assigned training to be carried out every day at home. They had to train every day for a half hour for gait training with metronome click-embedded music gait that was either classical or folk music. In other words, they walked with music and rhythm.

When the Control Group Stopped RAS Training they had Increased Falls

After the control group went back to the RAS training, by the 24th week there was no difference in the number of falls between the two groups. Both groups showed improvement with ankle flexion, walking speed and stride length and RAS training also lowered the number of unintentional falls.

Other Studies also Showed Benefits of Rhythm and Music

See our blog post from November 14, 2018 about how group singing along with the piano was also beneficial for people suffering from Parkinson’s disease. The group singing improved stress and mood as well as motor function.

Parkinson’s disease (PD) is the second most common neurodegenerative disease after Alzheimer’s disease. About a million Americans have Parkinson’s disease and every year there are about 60,000 new cases. About 10 million people suffer from PD worldwide. Most people develop Parkinson’s after the age of 60. However, there are also early onset cases in younger people. Parkinson’s is more common in men than women unlike Alzheimer’s disease, which is more common in women than in men. To date, no cure or way of reversing PD has been found. Treatment mainly focuses on treating symptoms with medicines to replace dopamine in the brain.

Parkinson’s patients need many different kinds of therapeutic treatments such as speech therapy, physical therapy and occupational therapy. Music therapy can also be beneficial as shown in the Rhythmic Auditory Stimulation (RAS) study.

Parkinson’s disease is progressive, which means that it may get worse over time and the day may come when it is time to think about long-term skilled rehabilitation and nursing care.