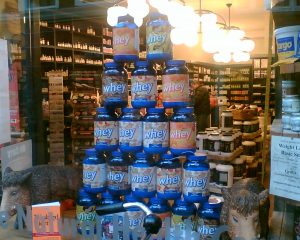 Whey Powder for Sale in a Health Food Store

One of the consequences of aging is a reduction in muscle mass called sarcopenia. Leading a sedentary lifestyle makes it even worse. To date, no one has really found a way to prevent the loss of muscle mass or reverse it. Also, seniors who are recuperating from periods of inactivity after hospitalizations and surgeries may note that the inactivity has led to muscles becoming atrophied and less dense. A study published October 4, 2018 in the American Journal of Clinical Nutrition showed that the best protein to rebuild muscle mass in seniors is whey, which is a liquid by-product from making curdled milk cheeses.

Whey is considered to be a complete protein and is rich in all necessary proteins, especially leucine. Leucine has been shown to be beneficial to rebuild muscle and so body builders and athletes like to consume it.

Participants in the Study were Divided into Two Groups

During sedentary inactive periods there was no benefit from consuming either kind of protein and both groups lost lean muscle mass in their legs. However, once they returned to normal physical activity, the whey protein was found to be the most beneficial for rebuilding muscle mass.

Collagen peptides were shown to be totally useless for seniors to take as a supplement.

Whey Protein, Leucine and Vitamin D Shown to be Beneficial for Parkinson’s Patients

In a different Italian Study, whey Protein, leucine plus Vitamin D were shown to be beneficial for people suffering from Parkinson’s disease (PD). The study of 150 men, women, children and seniors who either had Parkinson’s disease (PD) or Parkinsonism were divided into two groups. One group ate only hospital food for 30 days, while the second group received both hospital food plus the supplement of whey, leucine and Vitamin D two times a day for 30 days.

After the completion of the 30 day period, the participants were given a battery of tests to measure their gait and see how far they could walk. The group that had been given the nutritional supplement that contained whey, leucine and Vitamin D were able to walk faster and further than those who had only eaten only hospital food.

Rehab after Illness, Surgery or Hospitalizations

If you or your loved one are in need of rehabilitation, the Royal Suites Healthcare and Rehabilitation in Galloway Township, New Jersey is a beautiful 5-star rehabilitation and skilled nursing facility that offers expert post-surgery recovery, post-stroke care, cardiac rehabilitation, diabetes care and monitoring, recovery from falls, accidents and motor vehicle trauma. Royal Suites has a state-of-the-art gym with all the necessary rehabilitation equipment. Royal Suites also is surrounded by eight acres of woods and landscaped gardens and offers fine nutritious restaurant style dining.

Seniors and Parkinson’s patients might consider adding whey to their diets unless they have an allergy to milk, as it has been shown to be beneficial in rebuilding muscle mass.