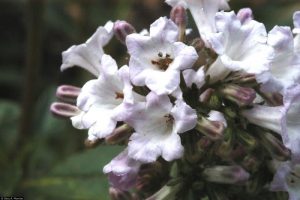 The search for a cure, prevention or way to retard the progression of Alzheimer’s disease (AD) so far has not borne fruit, in spite of the fact that millions of dollars are being poured into research. Scientists all over the world are trying hard to find some way to prevent, slow down or cure Alzheimer’s disease. Scientists are also searching through the plant world, as so many medicinal drugs came from there like aspirin from willow, digitalis from Foxglove, statins from a red yeast that grows on rice and many more. A study published February, 2019 in Redox Biology by researchers from the Salk Institute found that the Yerba Santa (Holy Herb) E. Californicum shrub has properties that can protect the brain from degeneration and may be a possible treatment for Alzheimer’s disease. The Yerba Santa evergreen aromatic shrub found in California, Oregon and northern Mexico has been used in folk medicine by Native Americans for healing respiratory ailments like asthma, fever, headaches, stomach-ache,  purifying blood and rheumatic complaints. The researchers were specifically interested in finding something that could work against aging, as this is the number one risk factor for developing Alzheimer’s disease.

Besides sterubin, Yerba Santa contains the flavonoid fisetin, which is also a subject of anti-aging research and has been shown to be a possible treatment for Alzheimer’s disease. The Salk researchers discovered that sterubin is about 4-fold stronger than fisetin. See our blog post from October 4, 2018 about fisetin.

Alzheimer’s disease is the number one cause of dementia in the United States and it is estimated that more than 5.7 million Americans are afflicted with it. Alzheimer’s is a disease that progresses slowly and over time causes dementia with extensive memory loss, personality changes, sleep disorders, problems with smelling, and an inability to reason. In its final stages there is an inability to carry out even the most simple day-to-day tasks and they may no longer recognize family members including life-long spouses. According to the National Institute on Aging (NIA), while Alzheimer’s disease is currently listed as the 6th leading cause of death in the United States, it may really be the 3rd leading cause of death, as many cases do not get reported on death certificates.

The classic hallmarks of Alzheimer’s disease are a buildup in the brain of two proteins. One is beta amyloid which forms into plaques and the other protein is tau which develops into tangles. These cause the death of neurons (brain cells) and the brains of people with Alzheimer’s shrink and are eventually destroyed.

Scientists do not know for certain what causes the development of Alzheimer’s disease, but believe it is a combination of genetic, environmental and lifestyle factors. Recent research has found herpes viruses in autopsies of brain tissue of people who died from AD, the NIA is sponsoring clinical trials where people with early Alzheimer’s are being given antivirals to see if this can stop the disease.

Let us hope that further research with these flavonoids sterubin and fisetin found in the Yerba Santa shrub will lead to a cure or way to reverse this devastating Alzheimer’s disease and dementia.